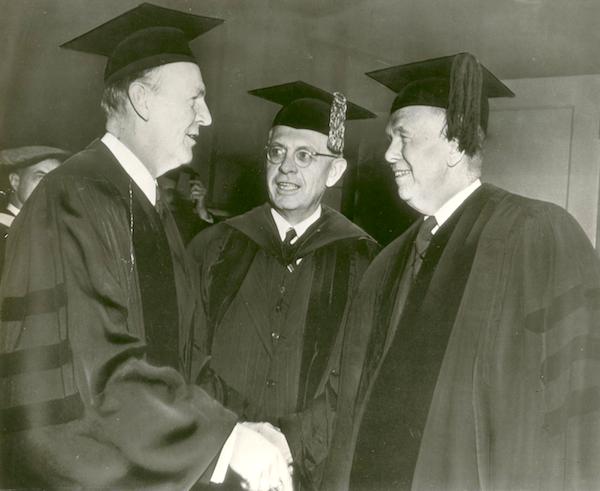 Seventy years ago, newly appointed Secretary of State George C. Marshall delivered remarks at Princeton University on the occasion of George Washington’s birthday. Marshall had been sworn in a little over a month earlier, yet his remarks revealed a thorough understanding of the world situation as well as his views on the more active role the United States must play in world affairs.

During World War II Marshall declined invitations to receive honorary degrees from a number of universities, including Princeton, because he did not believe it was appropriate to receive special awards or recognition during wartime. When Marshall became secretary of state, he felt he needed to accept the invitations he had previously turned down and began making arrangements with the institutions that had sought to honor him.

At Princeton, Marshall was asked to deliver remarks at a luncheon following the awards convocation. Although Marshall had initially planned to talk “quite informally and without written notes,” he decided to draft a written statement, which he sent to Undersecretary of State Dean Acheson for comment.

Marshall began his remarks by saying that today’s problems “are different but no less vital to the national security than those during the days of active fighting.” He expressed concern that “Many of our people have become indifferent to what I might term the long-time dangers to the nation’s security.”

Turning his attention to the world situation, Marshall remarked, “We have had a cessation of hostilities, but we have no genuine peace…. Order has yet to be brought out of confusion. Peace has yet to be secured. And how this is accomplished will depend very much upon the American people.” Marshall continued by observing that “Most of the other countries of the world find themselves exhausted economically, financially and physically,” and shared his belief that “If the world is to get on its feet… a strong lead and definite assistance from the United States will be necessary.”

Marshall’s remarks at Princeton reveal that he began to consider the world situation and the need for United States’ involvement to help countries rebuild as well as confront global issues early in his tenure as secretary of state. The presence of similar ideas and statements as more fully developed concepts in Marshall’s famous remarks at Harvard University on June 5, 1947, commonly known as the Marshall Plan Speech, indicate that what Marshall said at Princeton provided the foundation for his subsequent address at Harvard. Through both speeches, and many others, Marshall convinced the American public to support the rebuilding of foreign nations and to accept the need for the United States to exercise greater leadership in world affairs.

You can access the full text of Marshall’s remarks at Princeton University as well as other documents from volume 6 of The Papers of George Catlett Marshall on the Marshall Foundation website.