Some of George Marshall’s favorite childhood memories were going fishing, especially with his father. These father-son excursions led to an enjoyable lifelong hobby for him. One story of a childhood fishing trip was on the Youghiogheny River (pronounced “Yock-a-gainy”). Marshall’s father and two friends, along with young George (not too much older than the photo above), went fishing for “salmon pike,” probably a type of walleye. They weren’t having any luck, so the two friends decided to hike up to a fishing hole known to be lucky. It was a rough climb, and Mr. Marshall knew George couldn’t make it, so he took his son to a  closer site.

George was fishing with his father’s pole with double hooks on the line, but with no reel because Mr. Marshall didn’t think he was big enough to handle it. He tells, “when he baited my hook with minnows, I threw it in and he started to bait his own. I got a strike, the first strike of the day for any of us. When I began to pull the fish in, I had two bass, one on each hook. My father had to help me land them and lift them out of the water. Then he had to get them off the hook and rebait it.” George immediately caught more fish, and the two of them caught 30 bass, then returned to the cabin where the fishing party was staying. It was after dark when the other two men came in empty-handed, and “side by side, father and son, displayed their catch” (Education of a General p 23).

Marshall surf fishing at Fire Island, where Katherine’s family had a summer home.

Marshall had an opportunity to fish for real salmon when he was stationed at Vancouver Barracks, WA, in 1936-1938. On at least one of these trips, Katherine accompanied him, but there was only one fishing pole in sight. George and Katherine Marshall on a fishing trip in Vancouver, WA.

One of Marshall’s other fishing companions was Samuel “Corty” Slaymaker. They “fished together a number of times, and on one deep sea expedition, Corty was the only member of the party to catch anything, he being about 7 years old at the time” (Man of the Age, p. 672). George Marshall fishing from a boat … 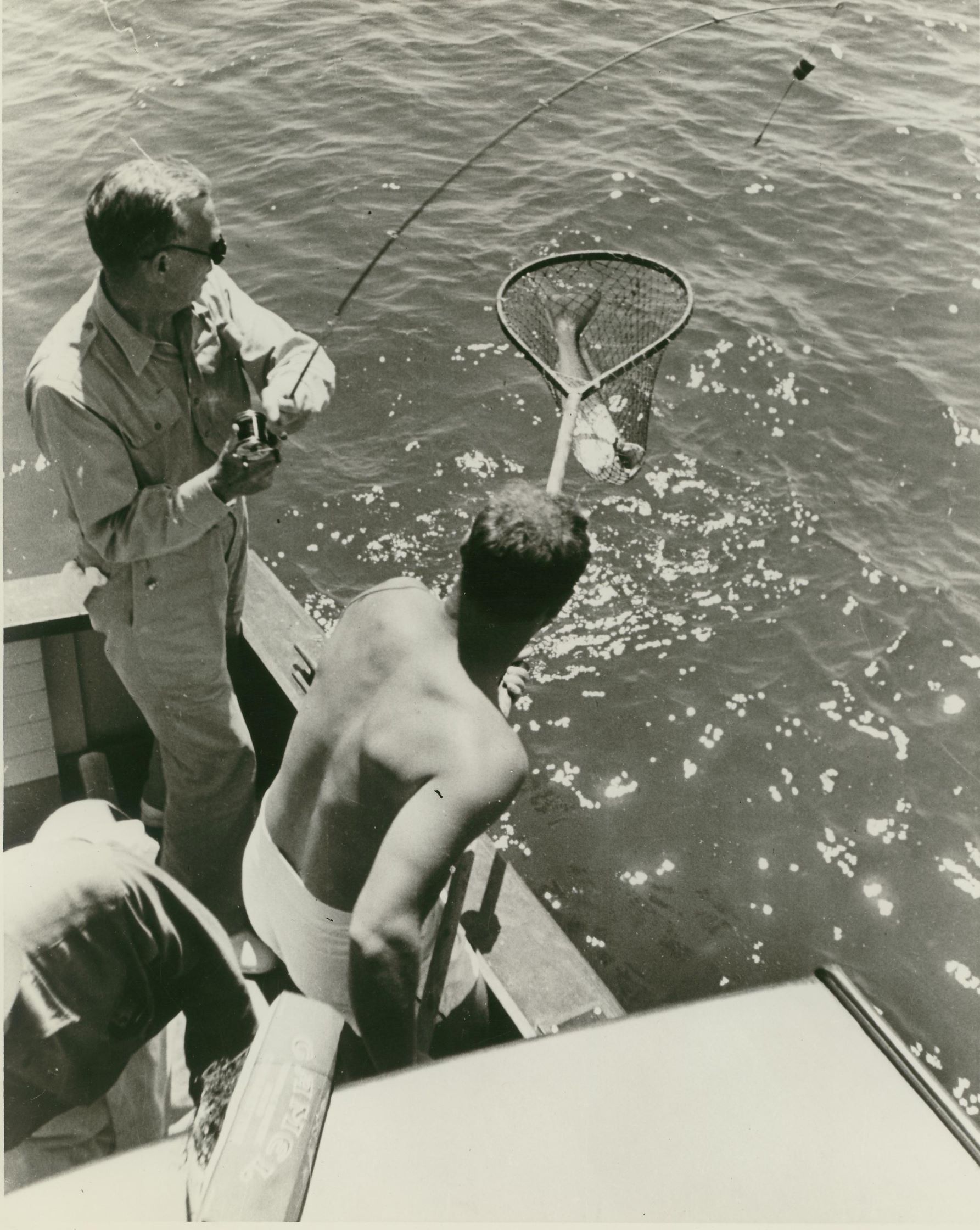 and catching a good-sized fish!

In a letter Marshall wrote to Corty while he was in college at Princeton, Marshall contemplated addressing it “Honorable Corty, FPE, meaning ‘Fisherman par Excellence.’” He went on to describe a holiday fishing trip to South Carolina: “We are going fishing Monday for bass and brimm on a nearbye lake. Down in So. Carolina Xmas time on a tidal stream in from the ocean, three of us caught 34 1 ½ to 2 ½ pound ‘spots’ in half an hour” (Man p 672). Marshall off Fire Island in 1939

Another of Marshall’s favorite fishing companions was Gen. Henry “Hap” Arnold, Chief of the Army Air Corps. One fishing trip was on the way home from Italy. Their plane stopped at a refueling base in Newfoundland, and Marshall and Arnold joined a short fishing expedition nearby. A member of the party later wrote an article for a magazine, and said that the generals were “real and sincere; men who know and understand the outdoors, and believed that a morning’s fishing, even in a downpour, was the right sort of break in what must be an almost continuous time of tension and strain” (Aggressive and Determined Leadership, p 482). Marshall fishing in the rain in Newfoundland

Another Marshall and Arnold fishing trip was a week one August in the Sierra Nevadas, in Inyo National Forest, home to beautiful scenery and Mono and Mammoth Lakes. A happy George Marshall on a fishing trip on the Gaspé Peninsula, Quebec

The Marshalls sometimes joined friends at at lake camp to fish. Marshall tells of one trip, “my first day – 6 large lake trout and a five pound bass that required 25 minutes to land – but since the take has been strictly limited” (Man p 785). The Marshalls with friends at a lake camp in Oregon.

Shortly before he became U.S. Army Chief of Staff, Gen. Marshall wrote his friend brand-new Brig. Gen. Bruce Magruder, and advised him “to make a studied business of relaxing, taking things easy; taking trips. I fear it will be next to impossible for you to relax to anywhere near the degree that I think is important” (Letter to Magruder, Aug. 7, 1939).

For George Marshall, fishing was one of his few relaxations in hard-working, stressful jobs.