George Marshall loved dogs. He had several as a boy, and usually had one around as an adult. This is the story of Fleet the dalmatian, George Marshall’s dog at the beginning of World War II.

Fleet was a gift from Secretary of State Edward Stettinius. Fleet was grandson of a champion; he learned to be a good coach dog, and would run along when Marshall would ride his horse. 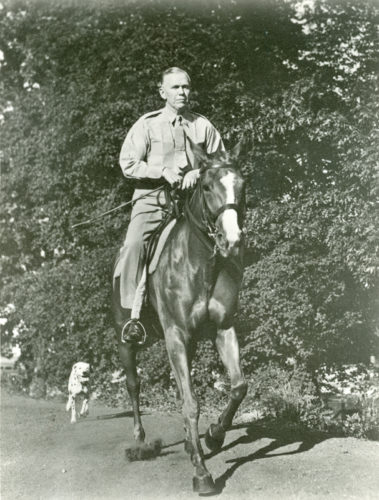 Fleet running along with Gen. Marshall in 1941.

But Fleet loved to get into mischief.

Marshall reported that “Fleet is crazy about getting in the car when I go horse-back riding. The trouble is, he gets into anybody’s car. [Sgt.] Dumcke removed him from a stranger’s car recently near the Lee mansion, where he was eating sandwiches, and yesterday the military police brought him home.”

Fleet liked to wander while he lived at Quarters 1 at Fort Myer with the Marshalls. He was well known on Post, and frequently brought back by neighbors. One time Fleet even wandered across the Memorial Bridge into Washington, D.C., and was brought home by a government worker. 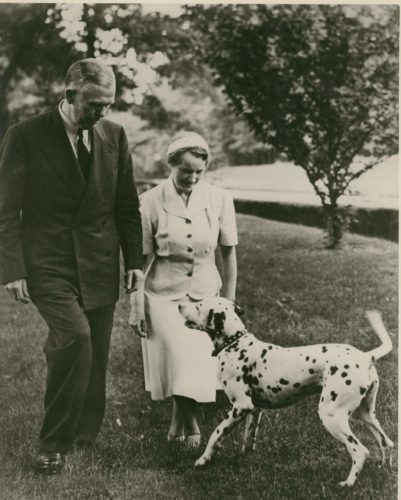 The Marshalls with Fleet in their yard.

Fleet moved to the Marshall’s home, Dodona, in Leesburg, VA, with the Marshalls, but it didn’t go so well. Marshall wrote that Fleet “made a specialty of killing chickens, so after infuriating 3 neighbors of ours at Leesburg in one day while I was in Cairo and Teheran, Mrs. Marshall enlisted him in the Army down at Front Royal.”

Poor Fleet, he wasn’t much of a soldier at the War Dog Training Center at Front Royal, either. In a letter to a friend, Marshall wrote that “my stepdaughter Molly saw him there not so long ago and he had not proved to be a very valiant soldier, was gun-shy, & delighted to see anyone, friend or enemy. In a movie of the Army dogs … they had him sitting on top of his kennel.”