George Marshall called him “Powder.” Powder ordered a warm winter coat for Gen. Marshall before traveling to Russia and found a birthday cake on Christmas Eve for Katherine to celebrate Field Marshal Dill’s birthday. He traveled to conferences in Paris, Casablanca, Yalta, Quebec, Algiers, and Potsdam, but he was not in any of the photos. Well, he was in one, as he explained, “At Yalta, in the courtyard, sticking just above Gen. Kuter’s shoulder. I am off to one side and I am standing just in a little knoll there.” Who was this “Powder?”

Master Sgt. James W. Powder was Gen. Marshall’s chauffeur and aide during World War II, a position usually held by an officer. At 6’ 4” and 200 pounds, he was also a de facto body guard as well, as the Chief of Staff had no security detail of his own. James W. Powder was born June 4, 1898, in Rockford, IL (nb — a family member reports he was born in Spring Valley, IL, and later moved to Rockford). He enlisted Nov. 14, 1914 in the 2nd Field Artillery, when he was 15, a year after completing the eighth grade. At the physical exam, the doctor questioned his age, which Powder swore was 22. The doctor knew he was younger and was hesitant to sign off. Powder said, “I want to go to the Philippine Islands. There’s the 2nd Field Artillery, a mountain battery that I want to join.” He served with the 2nd as a private, corporal, and sergeant. 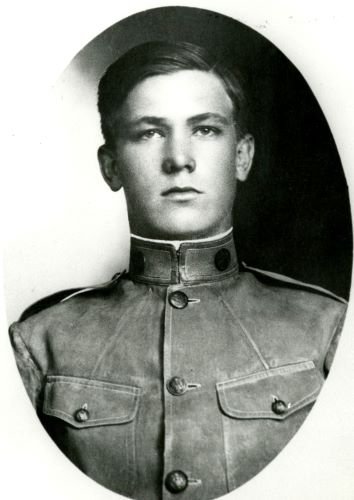 Sgt. Powder in World War I

In World War I, Powder was assigned to the French 75th Artillery in Brest. After he returned to the United States, he was assigned to the 81st Artillery at Fort Knox, KY. His commanding officer thought that Powder would be a great drum major for the unit band, due to his impressive size. Powder protested that he knew nothing about music, but the officer gave him a broomstick and told him to go learn. So Powder did.

Powder stayed in the field artillery until he was assigned to Washington, D.C., to be a driver for Gen. Pershing in 1928. In D.C., Powder met and married Helen Kline, and they rented a row house in NW D.C.

Powder became a driver for the Chief of Staff office, and when Gen. Marshall became the Deputy Chief of Staff in 1938, he met Sgt. Powder. The two hit it off, and soon Powder was not only his chauffeur, but Marshall’s aide and sometimes Katherine’s helper. She wrote in her book, Together, “I sent for Sergeant Powder and turned the problem over to him. He had long been George’s ‘trouble shooter’ and when a thing had to be done Sergeant Powder got the assignment.”

Most of the time, Master Sgt. Powder was in the background. When Marshall and Katherine had a photography session, Powder was there. Sometimes, Powder was in photos seen all over the world. At the second Quebec Conference in 1944, Field Marshal John Dill stepped off the elevator with other dignitaries and saw Powder, whom he had grown to know as he worked with Marshall on the Combined Staffs in D.C. As others went into the conference room, Dill came over and said hello to Powder. The moment was captured by an Army Signal Corps photographer. On April 15, 1945, Powder appeared in another photo seen by many, as he presented the burial flag to Mrs. Eleanor Roosevelt at the funeral of President Franklin D. Roosevelt. Once Powder appeared in photos seen by only a few. Marshall asked Powder to get one of Gen. Pershing’s horses and go to Arlington Cemetery for photos at the grave site of Field Marshal John Dill. Powder told the story, “So I come out with a horse and a photographer and posed and had pictures taken from every angle, and I posed the horse on the grave and he took pictures all the way around. Instead of the sculptor coming here to look the place over, he says, ‘I don’t have to go there. I’ve got sufficient pictures right here to show me exactly how it’s going to set and everything else.’” You won’t see any photos of Powder with Marshall in China, because he wasn’t there. Powder told the story: “He asked me if I would go with him when the President called. After he hung up he says, ‘Sergeant, will you go with me?’ I said, ‘General, I don’t know. I’ll talk to Mrs. Powder and I’ll let you know tomorrow.’ Well I didn’t no sooner hit the door at home and Mrs. Powder says, ‘We’re not going to China.’ I’d already bought my trailer and my retirement had already, I think by that time was already in effect.” He retired in 1946 with more than 30 years in the Army. He had one more duty to perform for Gen. Marshall, however, as a pallbearer at Marshall’s funeral in 1959.