Upon arriving at Fort Benning, GA, the fall of 1927, Lt. Col. George Marshall was assigned quarters that were an old farmhouse behind the well-known home “Riverside.” 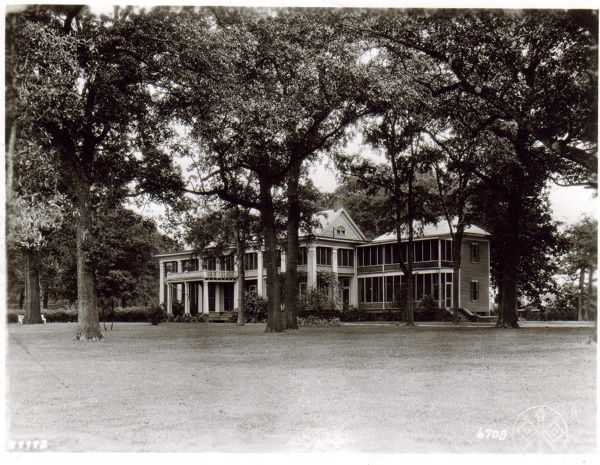 Marshall’s quarters are the building on the right, gone now.

He was pleased with his home, and wrote a family member, “The house I will occupy was a farm house before the government took over the place in 1918, and it has been steam heated, refloored and generally fixed up. So you see I will lead a country life, which is what I need.” He included a sketch of the home and yard: It was to this home that Marshall brought his new wife, Katherine, three years later. It was the first of 10 homes that the Marshalls would occupy over the next 17 years.

In July 1932, Marshall was transferred to Fort Screven, on Tybee Island, GA, commanding the 8th Infantry. Their home was built on an elevated piece of land, and featured wrap-around screened porches. After the affluence of Fort Benning, Katherine found Fort Screven “rather dilapidated.” She went on to write:

If the Post was shabby, with poorly kept grounds, he began fixing up his own garden and lawn, and within a few weeks all the lawns and gardens down the line began to take on a different complexion. There was never a word said, rarely an order given. Marshall was made a colonel a year later, and was sent to Fort Moultrie, on Sullivan’s Island, SC, where he was in charge of the 8th Infantry Regiment and all the Civilian Conservation Corps camps in South Carolina. Katherine talks about their home in her book, Together:

Our quarters at Fort Moultrie were not a home, but a hotel. The house had been built by the Coast Artillery in its palmy day, but now the place was in bad repair. It had 42 French doors leading out on the lower and top verandas, which extended around three sides of the house.  I got to work with a seamstress and made up 325 yards of curtaining for the French doors of our quarters. But alas! The very week that the last curtains were being hung, orders came for Colonel Marshall to go to Chicago as senior instructor for the Illinois National Guard. The Marshalls were at Fort Moultrie less than six months when Marshall got orders to report to Chicago. Since Marshall was attached to the National Guard, there was no housing. The family rented an apartment on the North Shore near the Drake Hotel, and by agreeing that no repainting needed to be done, got it for half rent.

In the spring of 1935, the Marshalls rented White Gate Farm cottage, outside Chicago, for a year and enjoyed being in the country for a while. The next orders came the summer of 1936, and with them the welcome surprise of Marshall being appointed a brigadier general. Their new posting was on the other side of the United States, at Vancouver Barracks, WA. On arrival, Marshall wrote to a friend,

We find our quarters here the most spacious and luxurious we have ever seen in the Army.  Then too, the trees and flowers, and the views are beautiful.  Mt. Hood looms up with its snow crown in the vista from Mrs. Marshall’s bedroom windows.  My predecessor left a rose garden of sixty varieties, and a pretty good amateur dahlia show.

In 1938, Marshall was transferred again, to Washington, D.C. He and Katherine rented a home at 2118 Wyoming Avenue, NW, which Katherine said was “a small home … there were trees in our yard, … and for a city home it was sunny and uncrowded by tall buildings.” They lived here until Marshall was appointed Army Chief of Staff, when they moved to Quarters 1 at Fort Myer, VA. The blueprints for Quarters 1

Built in 1899, Quarters 1 needed some work before the Marshalls moved in.

Part of the repair and remodel work. Note that the Marshalls wanted the two cannons out front removed, but Gen. Patton wanted them. Quarters 1 was the Marshall’s home during the World War II years. Its convenient location, just across the Potomac River from Washington, D.C., meant that Marshall could come home for lunch frequently. In the evenings, the Marshalls walked around Fort Myer, and down paths to the river.

Soon after moving on to Fort Myer, Katherine began looking for a home where she and Marshall could go for family time and weekend breaks. She found Dodona Manor, in Leesburg, VA, about an hour down Leesburg Pike from D.C. According to Katherine in her book, Together, the original part of the house dated from 1790, and was built by George Washington Ball, great-nephew of another famous George. It had been added on to over the years, and needed some work, but had enough land with it that Marshall could indulge one of his favorite pastimes – gardening. Soon, he had a large vegetable garden, and numerous flowerbeds. He liked to have help in the garden, and had grandchildren pulling weeds, and even Mrs. Chiang Kai-shek helping him during her visit one summer. Mrs. Chiang Kai-shek and Mrs. Marshall when they weren’t gardening. Enjoying the zinnias in one of the many flower gardens.

During the war, daughter Molly and daughter-in-law Madge and their children were frequent visitors, even living at Dodona for periods of time. After the war, the Marshalls rented a small home, Liscombe Lodge, in Pinehurst, NC, for a short recuperative time. They found the winter weather in the Sandhills much milder than in Leesburg, so they purchased the home a short time later. Marshall commented that Katherine would collect homes all over the United States if she could. Marshall’s birthday at Liscombe Lodge in 1957. 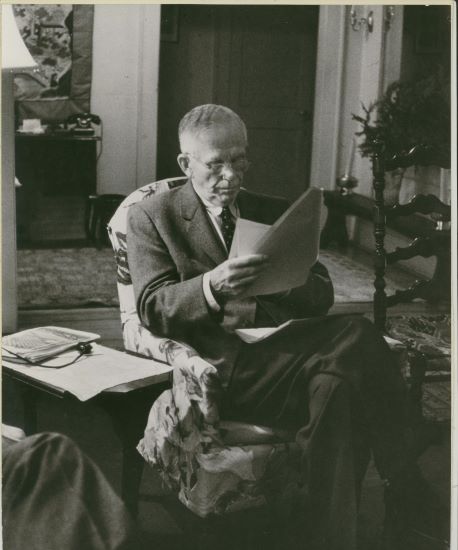 Marshall reading in the study at Liscombe Lodge. From 1947 until the late 1950s, the Marshalls spent summers in Leesburg and winters in Pinehurst, when George Marshall was not working elsewhere.

Melissa has been at GCMF since Fall 2019, and previously was an academic librarian specializing in history. She and her husband, John, have three grown children, and live in Rockbridge County with three large rescue dogs. Keep up with her @MelissasLibrary.