Gen. George C. Marshall and other members of the Joint Chiefs of Staff left Washington, D.C., just after D-Day on June 8, 1944, traveling to the United Kingdom, to be absent about two weeks. In England, they met with the Combined Chiefs of Staff (the American Joint Chiefs and the British military chiefs) June 10 and June 11 for an update on the war situation. Combined Chief of Staff meeting in Washington, D.C., earlier in the war

The evening of June 11, the Combined Chiefs and Prime Minister Churchill traveled by train south to the English coast. The next day the crossed the channel to visit Normandy.

Yes, that’s right. The British Prime Minister and military Chiefs of Staff, and the American Chiefs of Staff visited Normandy less than a week after D-Day. 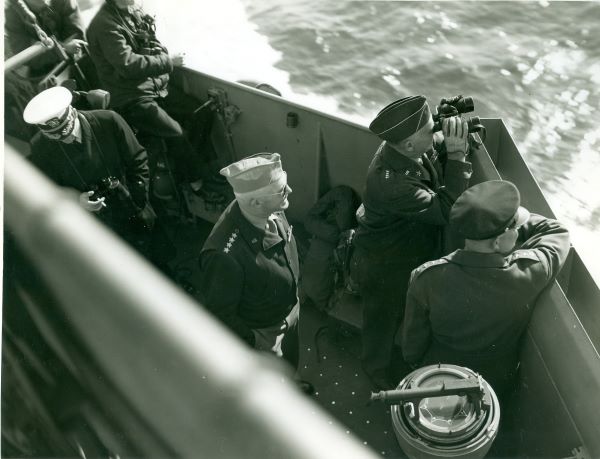 The Joint Chiefs crossed the English Channel by Naval ship They came ashore Omaha Beach on a DUKW. The only way to get out of this vehicle is to climb down the sides.

Climbing out of the DUKW on Omaha Beach set the tone for the visit. There was no fanfare or ceremony. The visit was kept secret as the Joint Chiefs were just a few miles from active battles and German Luftwaffe. For several days, the generals traveled with, visited with, ate with, and lived like the troops. Supreme Allied Commander, Gen. Dwight D. Eisenhower, washes up in a basin with water from a 5-gallon jerry can.

The Americans saw the harbor and beach areas, and ventured inland to visit a field hospital, viewing devastated northern French towns on the way. It was an important visit, as Gen. Eisenhower recalled, “Their presence, as they roamed around the areas with every indication of keen satisfaction, was heartening to the troops. The importance of such visits by the high command, including, at times, the highest official of government, can scarcely be overestimated in terms of their value to soldiers’ morale.” Destroyed areas of a town in Normandy.

The Combined Chiefs and Prime Minister Churchill ate dinner together that first night, and Churchill remembered noticing “General Marshall writing industriously, and presently he handed me a message he had written to Admiral Mountbatten, which he suggested we should all sign.” The letter to Admiral Lord Louis Mountbatten, who had been Chief of Combined Operations in England through 1943, described what the Chiefs had seen that day: “Today we visited the British and American Armies on the soil of France. We sailed through vast fleets of vessels with landing-craft of many types pouring more and more men, vehicles and stores ashore. We saw artificial harbour in the process of rapid development … we realise that much of the remarkable technique and therefore the success of the venture has its origin in the developments effected by you and your Staff of Combined Operations.”

The next day, Marshall and Gen. “Hap” Arnold visited U.S. Army Air Forces. General Arnold remembered that as “I went through from group to group, I couldn’t find anything these boys wanted that they didn’t have. They seemed to have all the planes, all the crews and all the parts they needed.”

Marshall visits with an infantry soldier along a road in Normandy. Marshall preferred to speak with enlisted soldiers about general conditions, as he worried that the reports he received were not unvarnished fact.

Marshall sent a handwritten note to Secretary of War Stimson and President Roosevelt that “conditions on the beachhead are generally favorable with but minor difficulties or delays. Morale of all our troops and particularly higher commanders, is high. Our new divisions as well as those which have been battle tested, are doing splendidly, and the Airborne Divisions have been magnificent. The creation of the artificial harbor off OMAHA beach proceeds with rapidity. I think exceeding expectation. It is a tremendous affair and bears a very important relationship to the success of our expansion and drive in France.” On June 17, Marshall and Arnold traveled to Naples, Italy. They desired their visit to be without any fanfare as they had at Normandy. Marshall flew over the beaches, including Anzio, where his stepson Allen was killed. Marshall sees the battlefield from the air in an observation plane. Marshall and Arnold left Italy June 19, with a layover and refueling stop in Newfoundland, where they took the opportunity of a short fishing expedition. A member of the fishing party wrote that Marshall and Arnold “are men who know and understand the outdoors and believed that a morning’s fishing, even in a downpour, was the right sort of break.”

The generals then headed back to Washington, D.C., to ensure continued progress of the war in all parts of the world.

Melissa has been at GCMF since Fall 2019, and previously was an academic librarian specializing in history. She and her husband, John, have three grown children, and live in Rockbridge County with their large rescue dogs. Keep up with her @life_melissas.