President Truman and Gen. Marshall on Marshall’s completion of his term as Chief of Staff of the Army on Nov. 26, 1945.

After the ceremony at the Pentagon recognizing the completion of Gen. Marshall’s term as Chief of Staff, the Marshalls left Quarters 1 at Fort Myer for good. As they arrived at their home in Leesburg, Katherine wrote that “we stood for a few minutes on the portico. The sun was shining through the trees, the surroundings were beautifully peaceful. It all seemed a good omen.” When they entered the house, Katherine went upstairs to rest, hearing the phone ring part way up but knowing that George would answer it.

When she came downstairs a bit later, she heard on the radio “President Truman has appointed General of the Army George C. Marshall as his Special Ambassadorial Envoy to China. He will leave immediately.”

So much for retirement #1. For a year, Marshall worked to bring the warring sides in China together, even getting a treaty signed, but the peace did not last. When Marshall returned from China in January, 1947, meeting Katherine for a well-deserved few days in Hawaii, it was not to go to home to Leesburg and return to gardening. It was to become Secretary of State.

So much for retirement #2. Secretary of State George Marshall being sworn in January 21, 1947.

The two years Marshall served as Secretary of State were literally world changing. The European Recovery Program, also called The Marshall Plan, provided means for countries in Europe to recover, without prejudice. A unique idea. 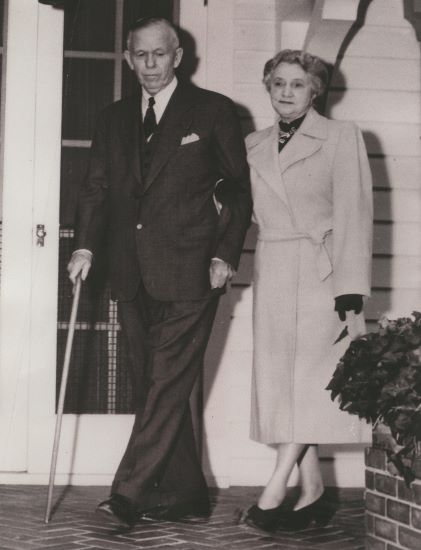 George and Katherine Marshall at their home in Pinehurst, NC, as Marshall recovered from surgery.

When Marshall resigned as Secretary of State in January, 1949, it was, Marshall thought, his final retirement. He had serious kidney surgery, so he and Katherine went to Pinehurst while Marshall recovered. While he planned to enjoy his retirement, Marshall was not completely done serving. He accepted the chairmanship of the American Battle Monuments Commission after his mentor, Gen. Pershing, died.

President Truman wasn’t finished with George Marshall yet. In the fall of 1949, he asked much-recovered Marshall to lead the American Red Cross, which needed a strong leader.

So much for retirement #3. As President of the American Red Cross, Marshall traveled extensively; at one point visiting 14 cities in just six days. He increased morale and dedication among the volunteers as he visited local units from NC to Hawaii. He told the press that this position, which he accepted at age 68, would be his last public job.

He was wrong, as in September 1950, President Truman asked Marshall to accept the position of Secretary of Defense.

So much for retirement #4. Becoming Secretary of Defense was touchy. Five-star generals leave active duty, but do not retire. In becoming Secretary of Defense, Marshall would be his own boss. An act of Congress allowing a special circumstance permitted him to accept the position. This was during the early days of the Korean War, and the small post-World War II Army needed rebuilding, and who better to do the job? Marshall informed President Truman he would accept the position for one year only.

He kept his word, and retirement #5 was a success. “The most important factor of all is character, which involves integrity, unselfish and devoted purpose, a sturdiness of bearing when everything goes wrong and all are critical, and a willingness to sacrifice self in the interest of the common good.”

Katherine’s quotes from her book Together.