Gen. Dwight D. Eisenhower, Supreme Allied Commander, accepted the unconditional surrender of German forces on May 7. The German Instrument of Surrender was signed the next day, and worldwide Allied celebrations began. In London, crowds poured into the streets. Trafalgar Square, pictured above, was full of cheering crowds. The lights came on, pubs stayed open, and celebrations lasted all night. The princesses Elizabeth and Margaret got to go out and join in the party, accompanied by security. At one point, they were in a conga line that danced into the very fancy Ritz hotel, and stood outside the Palace gates at midnight, chanting with the crowd “We want the king! We want the king!”

The citizens of London got to see their king, and also Prime Minister Winston Churchill, who led them through the dark days of war.

Gen. Marshall sent a note of gratitude to the Prime Minister:

“I can never forget, there will always be in my mind, the breadth of your vision and your generous attitude in effecting the coordination and final crystallization of our combined plans.  Personally I will cherish the friendship and confidence you gave me during the seemingly slow and tortuous progress to the greatest, the most complete victory in modern history.”

In France, crowds celebrated VE Day as they had the liberation of their country nearly a year before. 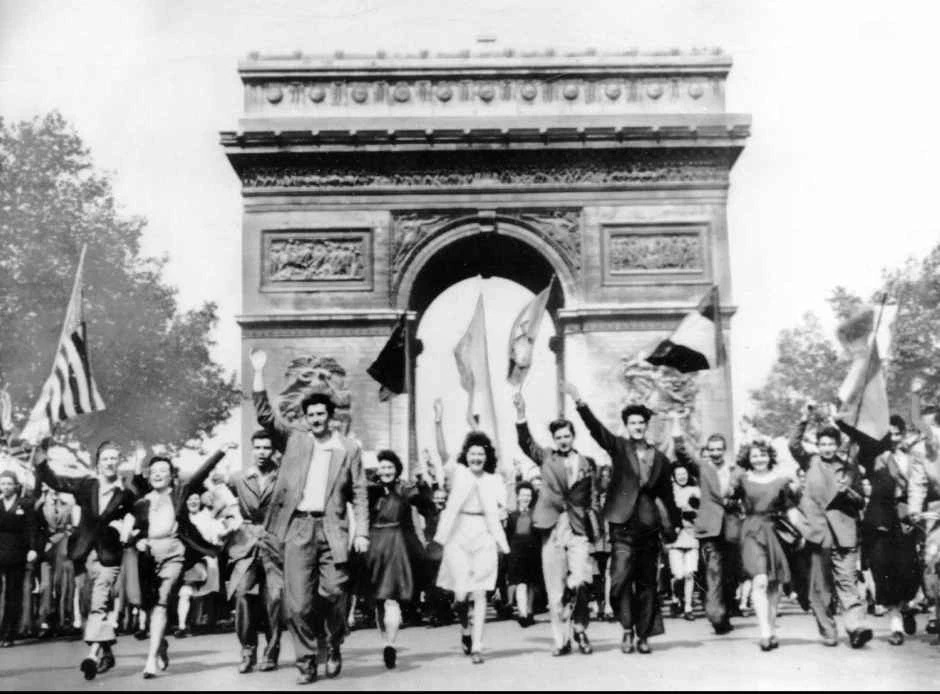 Gen. Marshall sent a radio “Personal” and “Confidential” to Gen. Eisenhower:
“You have completed your mission with the greatest victory in the history of warfare. Since the day of your arrival in England three years ago, you have been selfless in your actions, always sound and tolerant in your judgments and altogether admirable in the courage and wisdom of your military decisions. You have made history, great history for the good of all mankind and you have stood for all we hope for and admire in an officer of the United States Army. These are my tributes and my personal thanks.”

Gen. Eisenhower replied:
“I truly thank you for your message. Since the day I first went to England, indeed since I first reported to you in the War Department the strongest weapon that I have always had in my hand was a confident feeling that you trusted my judgment, believed in the objectivity of my approach to any problem and were ready to sustain to the full limit of your resources and your tremendous moral support, anything that we found necessary to undertake to accomplish the defeat of the enemy. Our army and people have never been so deeply indebted to any other soldier.” (Papers of DDE, 6:  14.)

In the United States, thousands gathered in the streets, dancing and cheering and celebrating the end of the war in Europe.

“Today we celebrate a great victory, a day of solemn thanksgiving.  My admiration and gratitude go first to those who have fallen, and to the men of the American armies of the air and ground whose complete devotion to duty and indomitable courage have overcome the enemy and every conceivable obstacle in achieving this historic victory.
The success of every campaign and operation has depended upon those who labored day and night to supply our Armies, to establish their communications, to perform miracles of engineering in advancing the fighting men. The world has never dreamed of such undertakings, just as the world has never witnessed such a victory.” In his statement read to the troops, Gen. Marshall extended “my warmest congratulations and personal thanks,” but then reminded the soldiers:
“Unfortunately, the conclusion of the European battle does not establish the peace for which we have been fighting.  A bitter struggle is now in progress in the Pacific.  We must continue to do all in our power to terminate the fighting.”

Victory was assured in Europe, but the war was not over.